A Shoe polish- and mustard factory, with the name "Müller & Droege" was foundet in Perleberg (Germany) in 1884. In 1916 this company was bankrupt and the bussinessman Mr. Hans Graff (the great grandfather of todays managing director Frank Wirth) bought the firm. He restarted the production but also transfered it to Meiningen. In 27. December 1919 Mr. Graff has been officially registered in Meiningen as the owner of the Company. The reason for the change of residence was the fact that electricity was readily available here. 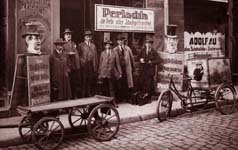 The name "Perladin" has been protected since 1924 by patent-office and has been used as product as well as company name since. Other names which were used are: "Funke & Co." and "Wachsschmelze am Kreuzberg". 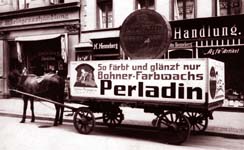 1958 the firm has been semi-nationalized. By a planed restriction and cutting off the supplies of raw material. Although the owners were so much under pressure, so that they have only, either to close-down the factory or to agree to a 49% take-over by a state bank.

In 1972 the owner had no choice: The firm has been nationalized over night an they were no longer allowed to enter the factory. The "VEB Haushaltchemie" (meaning: "public owned company houshold chemicals") was established.

In addition go that the stock has been removed step by step and the well known product hand wash paste "2x1" in tube confiscated. Other products at the time are metal polish "Sidol" - later "Perdol", mild cleaner "Reinax" and dry hand cleaner "Redih".

In 1990 the factory supposed to close down by order of the official receiver (trust -company). The other alternative was privatisation and running the company as Perladin Household chemicals Ltd. The production continued and the assortment increased step by step. In additionally to that the manufacturing came for other companies and limited number of wholesalers under their own label.

The prime reason for the survival in the first few years after change, were among others the following reasons: